Chickens have transitioned from the farms to backyards. With this, hens have acquired names, strolled into our homes, and are often treated as pets. Yet, despite these feather friends living a life far removed from factory farms, some of them are starting to look chubby. Can chickens be big-boned? Or have our trusty egg-layers gotten fat?

Chickens can become obese. The biggest culprits are lack of exercise and too many treats. Also, chickens are being bred to grow faster and fatter due to the commercial chicken market. Obesity in chickens can lead to problems such as fatty liver hemorrhagic syndrome and being prone to heat stroke.

The way we treat chickens has changed, both in farming and in our own backyards. While there is little the common backyard chicken owner can do about factory farming; we can adore our own flocks. The trick is not allowing our love of our pets to be part of the problem. Even our attempts to keep them safe can have negative side effects.

Chickens, like humans, can become obsese from too much food and too little exercise. Rescue chickens from factory farming are especially prone to weight gain due to modern desires for hens that grow faster and easily put on weight. There are also concerns that the antibiotics given to modern poultry not only increase their girth but ours too.

But breeding isn’t the only reason chickens are bulking up with unwanted fat. It’s because they’ve become “coop-potatoes.” Just like sitting on the sofa, watching TV and skipping the gym is bad for human health, chickens shouldn’t be cooped up all day (pun intended).

Back in the day, chickens ran around a yard or farm, scratching for the majority of their food. They were often given handfuls of feed and scraps, but the rest of it was forged. Looking for food takes work, burns calories, and keeps a chick fit. Unfortunately, a lot of modern chickens don’t do it.

Checkout these favorite chickens toys to help get your chickens moving, 20 Toys to Keep Your Chickens Entertained.

There are several reasons for modern chickens to be cooped up. Firstly, we keep chickens in coops or chicken tractors to protect them from predators such as coyotes. Then there is the fact that many towns and Home Owner Associations have laws insisting chickens must be cooped up.

Lastly, people are trying to protect the rest of the garden. Chickens love to munch on fresh fruit, vegetables and leaves that can be found in our gardens.

All of these are valid reasons for not allowing chickens to free-range. But there are ways to give them more space. Chicken runs are enclosed outdoor spaces that will enable them to move around. You can add “loft” levels, so they can fly up and down the runs, burning more energy, too.

Or fence off a part of the garden and just build a tunnel between it and the coop for the chickens to “run” between. That way, you can “close” the coop at night or when you’re not at home. This can minimize the risk of predators. 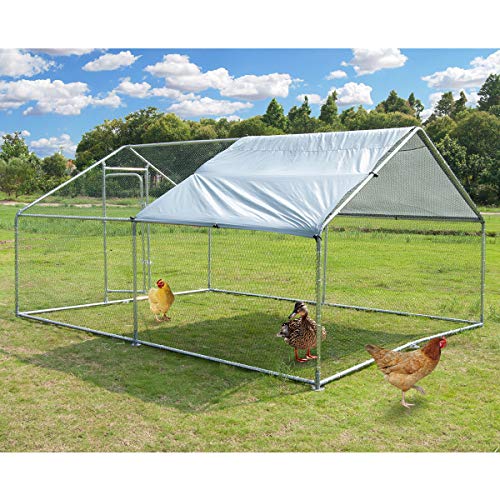 Spoiling pets is fun, but it can lead to extra pounds. People do it to their dogs and cats all the time, and a clever hen can beg just as effectively as man’s best friend. We give our hens treats, such as fruit and veg. Which sounds healthy. But the problem is, they don’t need much extra if they have free access to modern chicken feed.

Modern chicken feed meets all their nutritional needs. So unless they have limited coop access due to free-ranging during the day, they don’t need anything else. Mealworms, sunflower seeds, and watermelon are a delight but should not take up much of their daily allotment. Try to keep treats restricted to 1-2 tablespoons worth per chicken per day.

Nor is it ideal to restrict their feed. Chickens have small stomachs and can only eat so much at once. When they eat, there is a pecking order, and the hens, in the end, will struggle to get enough if feeding times are limited. The top hens will simply hog the feed during the eating windows.

However, it is a good idea to limit their access to scratch. This cracked corn and seeds are not nutritionally balanced. It is a bulker, nothing more. If you have free-range hens who mostly forage for food, a bit of scratch before bedtime might help them stay fit enough during learner and colder months. But coop-potatoes don’t need it.

Dangers Of Being A Fat Hen

Chickens certainly don’t stress out about a beach bod or enter themselves into beauty pageants; so, it can seem silly to worry about a little extra fat. But excess chub can lead to serious problems that shorten the lifespan of a beloved hen.

Two ways to check a chicken’s weight is to weigh her on a scale or feel for her breast bone. The breast bone should be detectable, despite the layer of fat. But if you can’t feel it under the fat layer, then there is excess fat.

Overweight chickens can develop fatty liver hemorrhagic syndrome. It is a condition that does exactly what it sounds like: a chicken’s liver collects fat, enlarging it until it hemorrhages. This can be fatal. Thankfully, there are some signs of it well before it kills a chicken. These include:

If you suspect your chicken(s) is in danger, cut off the treats and start finding ways to get the coop-potato into a backyard gym routine.

Chickens do not have sweat glands. Instead, to regulate their temperature, they use respiration. But extra abdominal fat inhibits the proper breathing required to keep them cool. Thus, a fatty abdomen can lead to overheating and death.

Heat stroke in chickens can be recognized by the following symptoms

Heat stroke in chickens needs to be addressed quickly to prevent organ damage or death. Cooling down a chicken with a cold bath and providing extra water and electrolytes will help a chicken recover from heat stroke.

Overweight chickens do not always cease laying due to fatty livers. Instead, they might start blessing you with large eggs or double yoke eggs. While, initially, this can seem wonderful, it can actually lead to egg binding.

The term “egg binding” describes the situation perfectly: an egg is stuck inside the hen. This is fatal if not treated, and the vet bill won’t be cheap. While some people try to help the chicken themselves by offering sugar water, this doesn’t tend to go well. Also, amateur extraction attempts can cause the egg to break inside her, which will cause infection.

Backyard chickens are often treasured family pets. We give them treats and keep them safe in cozy coops. However, this type of pampered treatment can lead to unwanted fat and shorten a chicken’s lifespan. Try to find ways to get you coop-potatoes some daily exercise and put a limit on the treats, even if they are healthy foods.

Chickens can also suffer from other weight issues like being underweight. Learn how to recognize and help your chickens if they are too thin in my article, What to Do if Your Chickens are Too Skinny.

Dane started learning about farming while volunteering on a farm. Now he and his wife raise chickens, pigs, and ducks on their small farm with their two little girls.

link to Is Rabbit Meat Healthier Than Chicken?

Rabbits are a common household pet but in many places, rabbits are also considered a great source of meat. With many people looking for a lean, healthy source of protein the question arises, is...

Continue Reading
link to Why Won't My Duckling Stop Quacking

Ducklings are adorable creatures, and they are growing in popularity as more people become homesteaders and self-reliant. Ducklings can become nosy, though, and there are various reasons for this....

I'm Dane, and I've been interested in animals, farming, and growing my own food since I was little. I believe in learning the skills to be self sufficient is important in this crazy world we live in and I want to share what I discover along the way.

As an Amazon Associate, I earn from qualifying purchases.
This site is a participant in the Amazon Services LLC Associates Program, an affiliate advertising program designed to provide a means for sites to earn advertising fees by advertising and linking to Amazon.com. We are compensated for referring traffic and business to Amazon and other companies linked to on this site.