Chickens are great to keep. They can become affectionate pets, lay eggs, and eat pests in the garden if they are allowed to free-range. One problem with chickens is that their coops can become quite smelly. For some people, this is off-putting, but the good news is that there are several ways of reducing and preventing unpleasant odors.

Prevent odors in a chicken coop by fixing leaks from drinking points and the roof. Remove chicken feces regularly to ensure the coop is clean. Ammonia from feces and bacteria growth cause bad smells. Use agricultural lime or other minerals to absorb moisture. Ventilation is key to reducing odors.

Controlling the smell in chicken coops can easily be managed through attention to coop housekeeping and regular cleaning. Having scheduled maintenance and coop cleaning days is the easiest way to prevent odors.

Why Do Chicken Coops Smell Bad?

Ventilation is essential and one of the best ways to control odors in a chicken coop. It reduces the ammonia content in the air, which is critical for maintaining the chickens’ health.

It is imperative to ensure that your chicken coop has fresh air traveling through it daily, even on cold winter days. The trick is to have adequate ventilation without losing heat or exposing the chickens to chilly winds.

An ideal way is to have a system where the warm contaminated air exits the coop, usually through a roof fan or air vents in the top of the walls. Cooler, clean air can enter through vents situated towards the bottom of the coop walls.

If you live in an area with a temperate climate, a large door and windows that can be opened daily work well for ventilation. A roof overhang will help to prevent rain from entering coop entrances in wet weather. 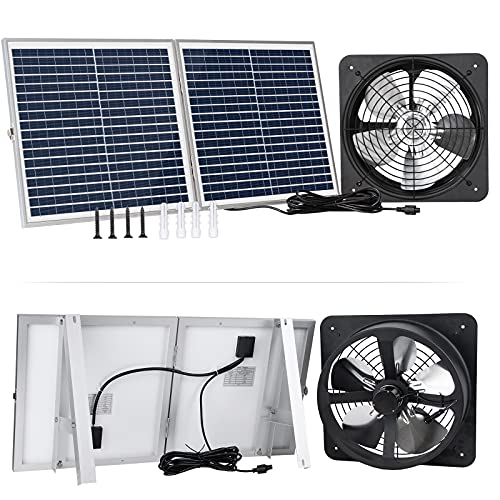 It is essential to prevent a build-up of chicken droppings which can facilitate the growth of bacteria and increase the ammonia in the air. The more chickens you have in a coop, the more often the enclosure will need to be cleaned.

There are a few techniques to help make removing chicken manure easy.

Maintaining a regular schedule for coop housekeeping will make it easier for you to monitor the state of the chicken house. During these times, you should check watering points to ensure there are no leaks.

It is a good idea to put a tray around the water buckets to catch excess water that the chickens may spill. The trays can have some absorbable material, such as shavings scattered in them. This makes it easy to control water spillage as the damp material can be cleaned away whenever necessary.

Clean the coop floor if the smell has become entrenched. Use a biological or enzymatic cleaner to wash the floor once the bedding has been removed. A vinegar-water mixture is an effective and cheap way of cleaning and reducing biological odors.

Replace the coop bedding routinely so that the coop stays fresh and dry. Your choice of bedding is critical. Wood shavings absorb moisture and are easier to clean than straw, which encourages mold growth as moisture is not well absorbed.

Maintaining a clean, dry environment in the chicken coop reduces the potential infestation by flies and other pests.

Collecting eggs frequently is another simple way to prevent unwanted smells in your coops. The more frequently eggs are collected the less likely they are to break. Check out my article, How Often Should I Collect Chicken Eggs? for all the details on when to collect your chickens eggs. 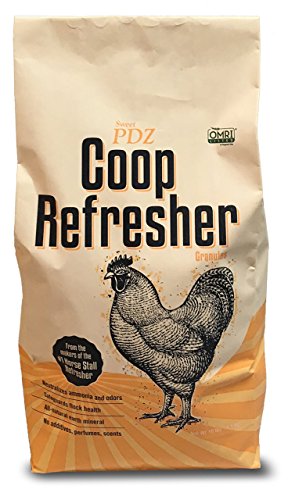 Use Products That Absorb Odor And Moisture

Agricultural lime is one of the products most commonly used in chicken houses to absorb and neutralize ammonia. It can be used liberally on the floor on the coop, keeping it free of smells and bacteria, contributing to the general health of the chickens.

There are several other products that you may find at your local agricultural co-op that may be used instead of agricultural lime. They tend to be more expensive, but some manufacturers claim they are better than lime. These products may not be available in smaller, rural areas, so check with your local co-op before deciding on a product.

If you have a herb garden, you can make good use of herb prunings by hanging them in your chicken coop. Bunch the herbs together, securing them with an elastic band or string. Hang them from the rafters or roof of your coop.

Use herbs such as rosemary, lavender, lemongrass, mint, basil, and catnip. Any herb that has a strong smell can be used in the coop. Most herbs are safe for chickens and can even be scattered on the floor. As they are crushed, the scent will be released and help cover up the smell of the coop.

Keeping a chicken coop free of odors is vital as a smelly coop is an unhealthy coop. Good housekeeping is the backbone of maintaining a coop with minimal smell.

Frequently cleaning your coop, preventing leaks and water spills as well as using moisture absorbing products are all easy ways to have an odorless coop.

Dane started learning about farming while volunteering on a farm. Now he and his wife raise chickens, pigs, and ducks on their small farm with their two little girls.

link to How Tall Of A Fence Do You Need For Goats?

If you have ever chatted with a goat owner, they will have countless stories to tell you about how their goats escaped from their paddock. Goats are notoriously destructive, with an immense appetite...

Continue Reading
link to How Often To Feed Ducks?

Keeping ducks, whether they are for eggs, meat, or as pets, is quite different from keeping chickens. They have slightly different dietary needs because the structure of their digestive system is...

I'm Dane, and I've been interested in animals, farming, and growing my own food since I was little. I believe in learning the skills to be self sufficient is important in this crazy world we live in and I want to share what I discover along the way.

As an Amazon Associate, I earn from qualifying purchases.
This site is a participant in the Amazon Services LLC Associates Program, an affiliate advertising program designed to provide a means for sites to earn advertising fees by advertising and linking to Amazon.com. We are compensated for referring traffic and business to Amazon and other companies linked to on this site.